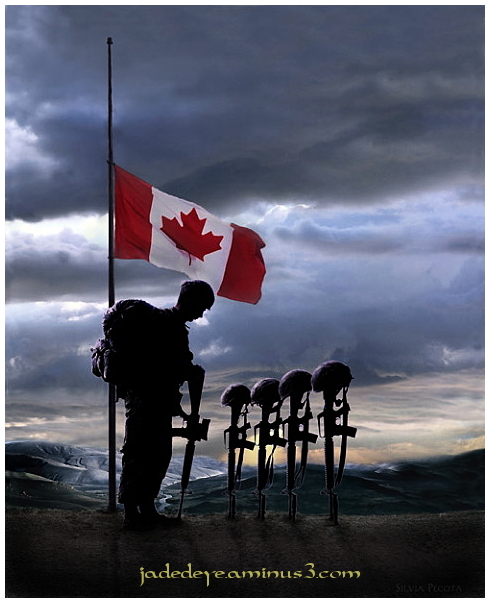 Posted by Eric Cousineau (Sherwood Park, Canada) on 11 November 2013 in Miscellaneous and Portfolio.

On the 11th hour of the 11th day of the 11th month, Canadians are asked to pause in memory of the thousands of men and women who sacrificed their lives in military service.

At public gatherings in Ottawa and around the country, Canadians pay tribute with two minutes of silence to the country's fallen soldiers from the First World War, the Second World War, the Korean War, the Afghanistan conflict and peacekeeping missions.

The association between the poppy and war dates back to the Napoleonic wars, when a writer saw a field of poppies growing over the graves of fallen soldiers.

During the Battle of Ypres in 1915, Canadian Lt.-Col. John McCrae was inspired to write the poem In Flanders Fields on sighting the poppies growing beside a grave of a close friend who had died in battle.

The poem was a great inspiration in adopting the poppy as the Flower of Remembrance in Canada, France, the U.S, Britain and Commonwealth countries.

The silence touched us here and the significance never fades.

A very poignant photograph, especially to those who have seen the ravages of war.

Strong tribute, Eric. Lest we forget.

Superb tribute Eric. We must never forget how lives were given up by many, so that others could live.

stunning photo of a very impressive monument on an important day !

This is just beautiful Eric! A wonderful tribute!

Wonderfully evocative of the somber day.

@Harry: Thank you very much Harry and welcome to my blog! Please come back and visit soon! ;-)

Visiting family prevented me from seeing this on Monday, but what an appropriate image this is. God bless them all!!!